After spending January in Santiago the rest of our time in Chile was largely spent with friends and family exploring the central coast and south of the country. Like me, Chile is very long and so we always knew it would be impossible to see all of the big highlights in one visit (again, like me). The Atacama Desert and Chilean Patagonia in particular were two such places that logistically, and particularly with a baby, we just couldn’t do. That said, what we did see over the final few weeks really enhanced our sense of the country, and in the case of Chiloe in particular, gave us a wonderful insight into a distinct and unique side to Chilean life.

In this blog entry we briefly sum up this 3-4 week period before our adventure took us north into Peru.

Our first visitors since Claire’s Mum Christine (back in BA in October) were Nannie and Papa, aka my Mum and her husband Keith. Amber is lucky to have some wonderful grandparents, and seeing the joy in the room when she is with her Nannie and Papa is amazing. One of the most difficult parts of our decision to travel was taking Amber away from her grandparents, and we know how much Amber is missed back in the UK. So it was fantastic to spend two weeks with them, split between our final few days in Santiago and a week on the coast in the resort town of Algarobbo. 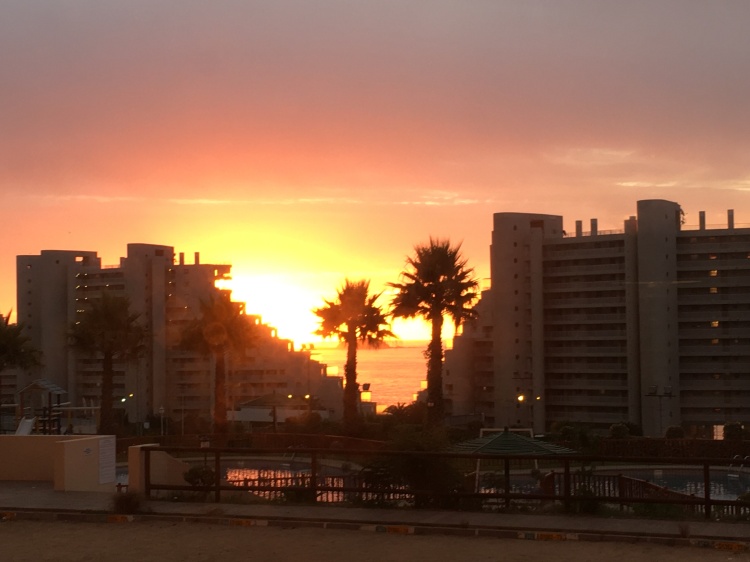 Sunset over the Pacific from our apartment in Algarobbo

Algarobbo is where the residents of Santiago escape to during the blistering summer months. With temperatures in the capital often in the mid 30’s, a mere 80 minutes drive west to the coast provides sanctuary and a more comfortable 20 degrees (in fact almost a bit chilly at times).

Algarobbo also claims to be the location of the worlds largest outdoor swimming pool and funnily enough we ended up staying very close to it. What they don’t tell you is that you can’t swim in the worlds largest swimming pool, you’re only allowed to do water sports. In my mind this makes it a man made lake… but regardless we were able to put our outrage to one side and enjoy a very relaxing, family-centric week here.

Amber simply loved having the complete attention of her Nannie and Papa. And we quite enjoyed being relegated to mere onlookers, allowing some respite from what can sometimes be a full on environment with the three of us normally in each other’s pockets 24/7. We enjoyed a couple of great meals out together where my Mum and Keith proved they can still put a shift in with the old Sauvignon Blanc, and generally had a sunny, relaxing, fun week all together.

It was with heavy hearts that we said goodbye to Nannie and Papa on the 9th, and after I had escorted our esteemed visitors to Santiago for their flight home it was time to move to our next destination. Just 20 minutes drive down the coast from Alagarrobo is the town of Isla Negra, best known for being one of Pablo Neruda’s homes (the Nobel prize winning Chilean poet).

We had found a wonderful place for our short stay here, up in the hills behind the town itself. The property was in effect a studio / gallery displaying artworks and sculptures by the Chilean sculptor Felix Marendu run by his son as a lasting legacy of his fathers work. Attached to the studio was a simple, characterful 2 bedroom cabin. We had a great two days here learning about Felix’s life and in particular the art he created in secret during the Pinochet regime. His son was a warm and funny host and we enjoyed the peaceful setting of his property. 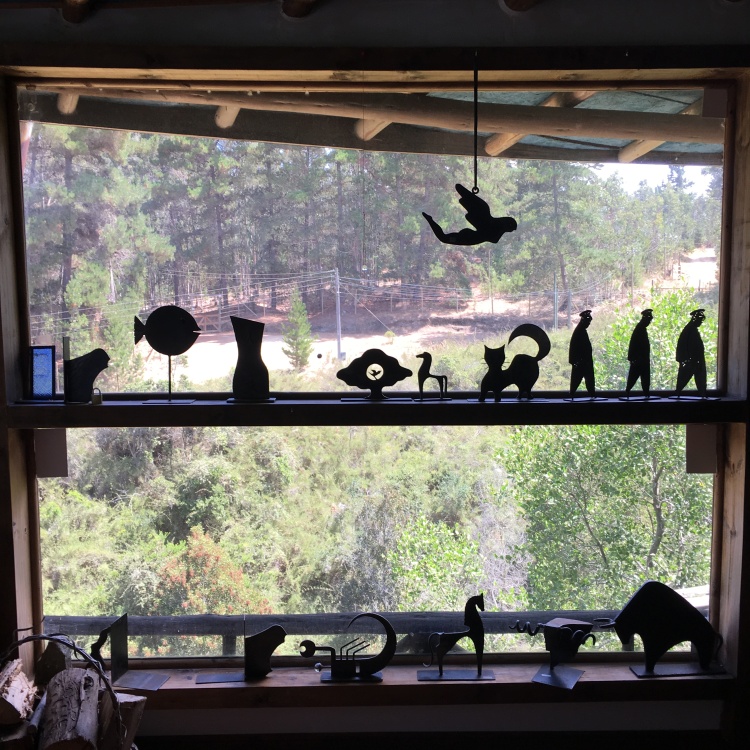 Our next visitors followed hot on the heels of Nannie and Papa, landing in Santiago on the morning of 11th February. Emily and Nick are dear friends from London and we were incredibly excited to see them. Unfortunately in the midst of our journey to collect them from the airport my passport was stolen. The details of this will be saved for a future post but needless to say this wasn’t the start we expected. That said we dusted ourselves down and cracked on with what would be a hot, boozy, wine-fuelled 4 days in one of Chile’s main wine regions, the Maipo valley.

Only 30 minutes from central Santiago the Maipo valley is made up a network of towns, villages and vineyards set amongst an arid, hilly landscape. Our property was a ludicrously large single storey building with vast expanses of gardens and fields all around it. It was a bit rough round the edges but served as a great base for barbecues, vineyard visits and general relaxation and mincing. The pick of the vineyards was Undurraga which was only 5 minutes drive away and and so in effect became our local off licence. Great wines straight from the source at the lowest prices – perfect.

The pool area and beautiful gardens in the Maipo Valley

After 4 days of wine and sun we headed south with Nick and Emily to Chile’s Los Lagos region; a vast area that begins around 900km south of Santiago and stretches down a further 500km. As the name suggests the area is characterised by lakes and also volcanoes. Our first destination of Puerto Varas captured both of these characteristics, sitting as it did on the shore of Lake Llamquihue in the shadow of the perfectly cylindrical Volcano Osorno. Not that you would know it on arrival. The low lying cloud thwarted any views and the immediate landscape was actually all in all very British. Rolling green fields, rain and farms. For Claire and I there was a sense of nostalgia, particularly after being in the heat of central Chile so long. For Nick and Emily, it was maybe more a question of how they travelled thousands of miles around the world and ended up in Somerset. However not long after, the skies cleared and the majestic cone of Osorno revealed itself on the other side of Lake Llanquihue.

Volcan Osorno as seen from the shore of Lago Llanquihue

Aside from volcanoes and lakes one further, unexpected characteristic of this particular part of Los Lagos was the heavy German influence – we saw German bars, restaurants, cafes, people, even some of the signs were written in German. Contrary to our theory that this could be to do with Nazis escaping Germany after World War II, I later (as in this morning) learned that between 1850 and 1875 the area received around 6,000 German settlers as part of a state led colonization scheme. Impressive to see that even over 150 years later the influence remains extremely strong.

Over the three days we spent in the area the weather was altogether pretty dismal, so our intentions to explore were often thwarted. That said it was an interesting and beautiful part of Chile to have visited, not to mention the fact that bad weather led the way to an incredibly civilised morning sheltering in our cabin drinking sparkling wine and eating sausages.

Goons at the Lagoon… A rain soaked trip to Laguna Verde, essentially a small green lake which due to the weather was the only thing we were actually able to visit

From Puerto Varas we headed further south down Route 5, Chile’s section of the famous Pan American Highway (said to be the longest motorable road in the world linking all the countries in the Americas, albeit with a 160km break for rainforest between Central and South America called the “Darien Gap” – just call me Mr Facts). Our destination was Chile’s second largest island, Chiloe, a place we had been drawn to by Lonely Planet’s introduction which read as follows:

When the early-morning fog shrouds misty-eyed and misunderstood Chiloé, it’s immediately apparent something different this way comes. Isla Grande de Chiloé is the continent’s fifth-largest island and is home to a fiercely independent, seafaring people.

Immediately apparent are changes in architecture and cuisine: tejuelas, the famous Chilote wood shingles; palafitos (houses mounted on stilts along the water’s edge); the iconic wooden churches (16 of which are Unesco World Heritage sites); and the renowned meat, potato and seafood stew, curanto. A closer look reveals a rich spiritual culture that is based on a distinctive mythology of witchcraft, ghost ships and forest gnomes.

All of the above is weaved among landscapes that are wet, windswept and lush, with undulating hills, wild and remote national parks, and dense forests, giving Chiloé a distinct flavor unique in South America.

In hindsight this is a good summary of our experience there. However Chiloe didn’t reveal it’s charms immediately. Out of everywhere we have been, you really needed time, a spot of decent weather and some patience to fully understand what makes this such a unique and endearing destination.

A very Chiloe-like scene. Look closely and you’ll see some forest gnomes on the hill to the left

After a day or two where the cold and wet weather perpetually hampered our ability to explore, we were suddenly treated to a period of dry (mainly, it’s all relative on Chiloe), warm and sunny weather where we were able to sample some of the island’s main draws – it’s wild, remote landscapes and it’s wonderful, unique food. So while the forest gnomes and ghost ships remained largely elusive we really did discover somewhere completely unique. 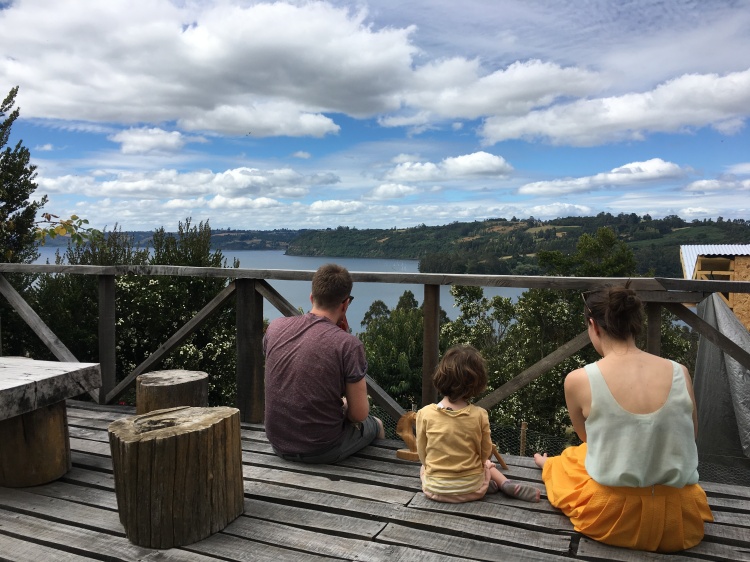 When the weather cleared our terrace provided a great view of Chiloe’s lakes, hills and valleys

The ferry ride from the mainland may only take 30 minutes but we cold easily have been in both a different country and a different time altogether. It will go down as a highlight of our entire trip, partly due to the knowledge that of those that visit Chile, very few will make it to this distinctive island in the south.

After a wonderful 10 days with our friends, Nick and Emily headed back north to spend their final few days in Valparaiso. Meanwhile we, at our own much slower pace, also began our journey north, in our case towards Peru. From Chiloe we stopped off in Puerto Varas for a couple more nights (which also included a 9 hour round trip back to Chiloe for me as we forgot our laptop – again more on this in a future blog entry), followed by a flight back to Santiago for one final night in the capital. Then, on the 25th February, we finally said goodbye to the country that had accommodated us for well over two months, and started the next stage of our journey in Peru. 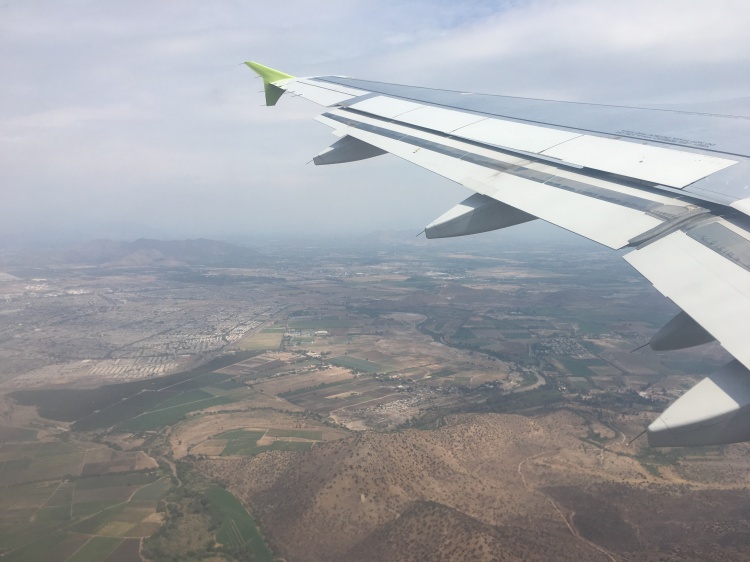 3 thoughts on “Central and Southern Chile with Family and Friends”