We knew before arriving in Rio that visiting with Amber in tow would be very different from the trip we would have had before becoming parents. For this visit at least, the city’s infamous nightlife would remain out of our reach.

But caiprinha fuelled samba parties are not all there is going on, and after two weeks in the ‘Cidade Maravilhosa’ we feel that we got a great taste of what it is about. Stunning, massive and fascinating, it had more than enough to occupy us, and despite thinking we were taking it relatively easy, we covered a lot of ground.

Rio is far more accessible than you would think given its reputation. Where we were staying in Barra Copacabana was safe and secure, and easy to get around by foot. The metro system is handy and linked us to various points of interest. Taxis are in abundance, and with Ubers as cheap as they are it often cost less to travel by taxi than by metro.
Here is a list of the things we did that we particularly enjoyed, and that we found to be either baby friendly, or at the very least baby accessible.

1. Parque Lage. The place we loved the most during our whole stay and the scene of Amber’s first official hike. Once the residence of a rich industrialist and now a public park, it has an abundance of fish ponds, woodland paths and, most enjoyably, grottos and caves to explore. As enthusiastic but novice spelunkers, we could barely contain ourselves. 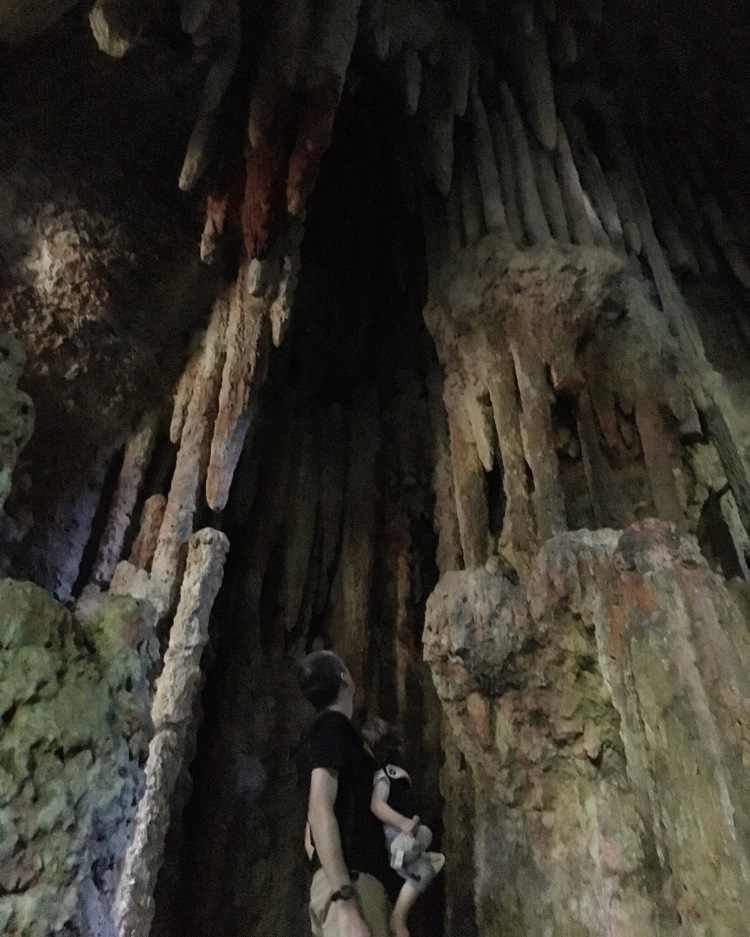 2. Sugarloaf Mountain. Famed for its incredible sunset views, this is obviously a must for all visitors. Sunset at this time of year is conveniently baby bedtime compliant (17:30ish), allowing us more than enough time to get to the top and back without getting home too late. We caught a few glimpses as the sun went down, but actually spent most of our time tucked away in a children’s play area, watching enthralled as Amber and the 14-month son of an Olympic swimmer from Papua New Guinea peacocked, flirted and danced around each other in what seemed like a strange mating ritual. 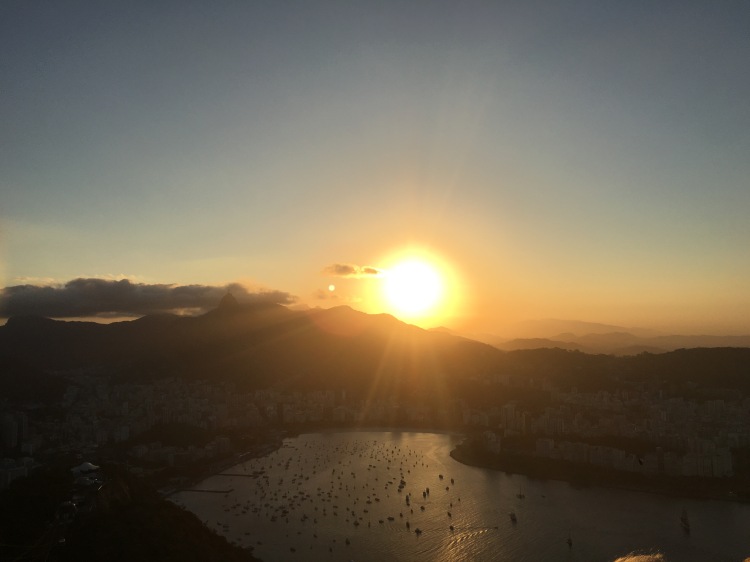 3. Ipanema beach. The waves seem (although actually probably aren’t) slightly more gentle and there is a far more family feel than its sister beach Copacabana (where we were ignored and not served in two separate bars). There is a sweet little playground where Amber experienced sand for the first time (unsurprisingly given her suspicion of grass, she was not an immediate fan), and there are loads of families and children generally playing and milling around. Mums with napping babies in prams strolled along the beach front, representing the Brazilian version of the NCT crew. We were at home. 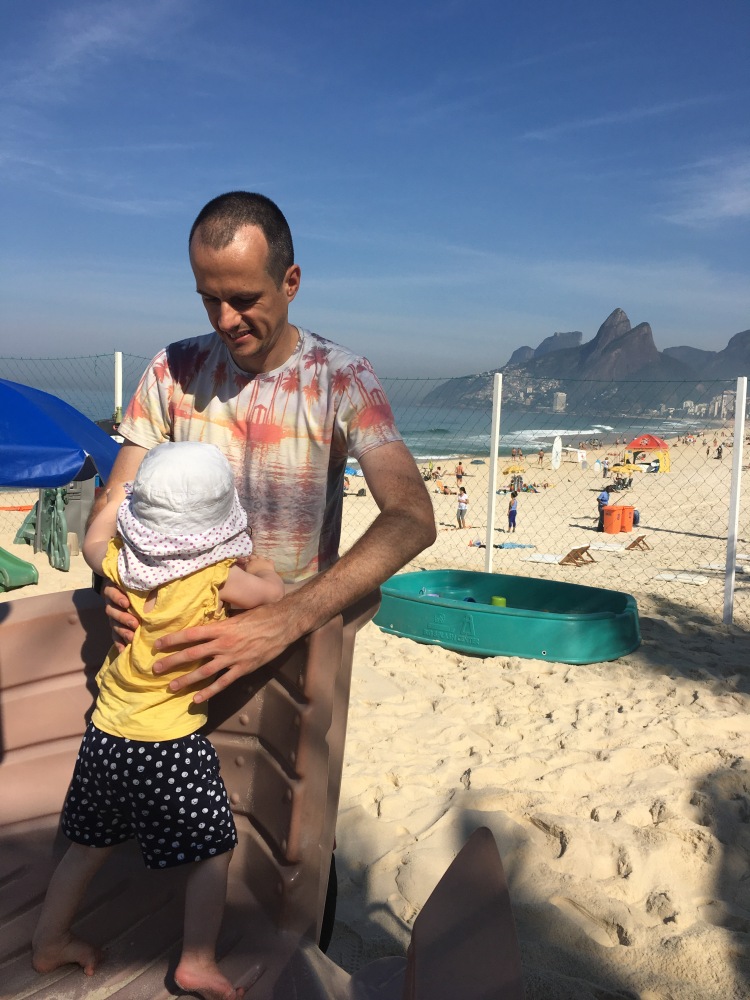 A playground with a view

4. Santa Teresa. Not in itself particularly baby friendly, but a lovely little day trip and well worth the visit. It is the site of the famous Escardaria Selaron, the colourful stairs made of different and unique tiles by Jorge Selaron which he claimed are a ‘tribute to the Brazilian people’. Once at the top of the stairs, a hike up the hill takes you past loads of impressive art deco houses to Parque das Ruinas, where the ruins of a former mansion offer spectacular views across the city. This was the first time we saw Rio from a vantage point, and it was utterly breath taking. 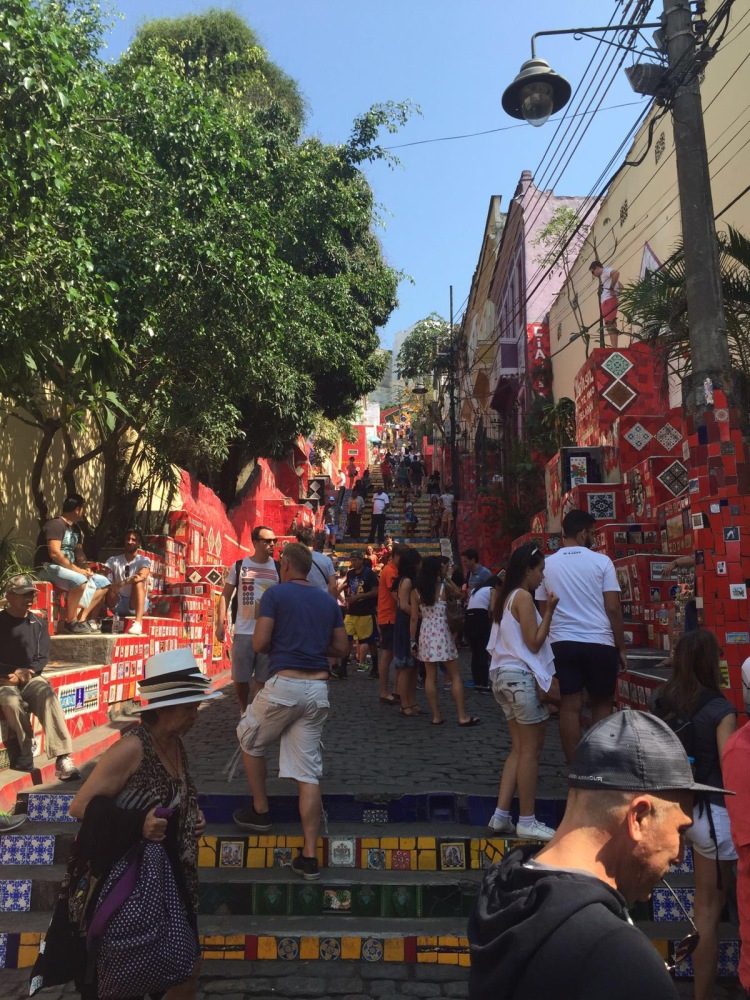 5. Praca Edmundo Bittencourt. A small little square in the middle of Copacabana, this is maybe an obscure entry at first glance. But immediately outside our flat with a charming playground, this should really be at the top of our list for the amount of time we spent there and what we all got out of it. Our trips to the playground punctuated our day. After breakfast, Amber would sit at the front door with her flip-flops in hand, waiting expectantly (read loudly and impatiently) to go out. We would also take her out in the early evening before bedtime, when the park was at its most lively and felt like a microcosm of Brazilian society. During our various trips, Amber made a couple of friends and at least one boyfriend, and we got to hang out with local parents, our mutual delight in our children overriding our need for a common tongue. 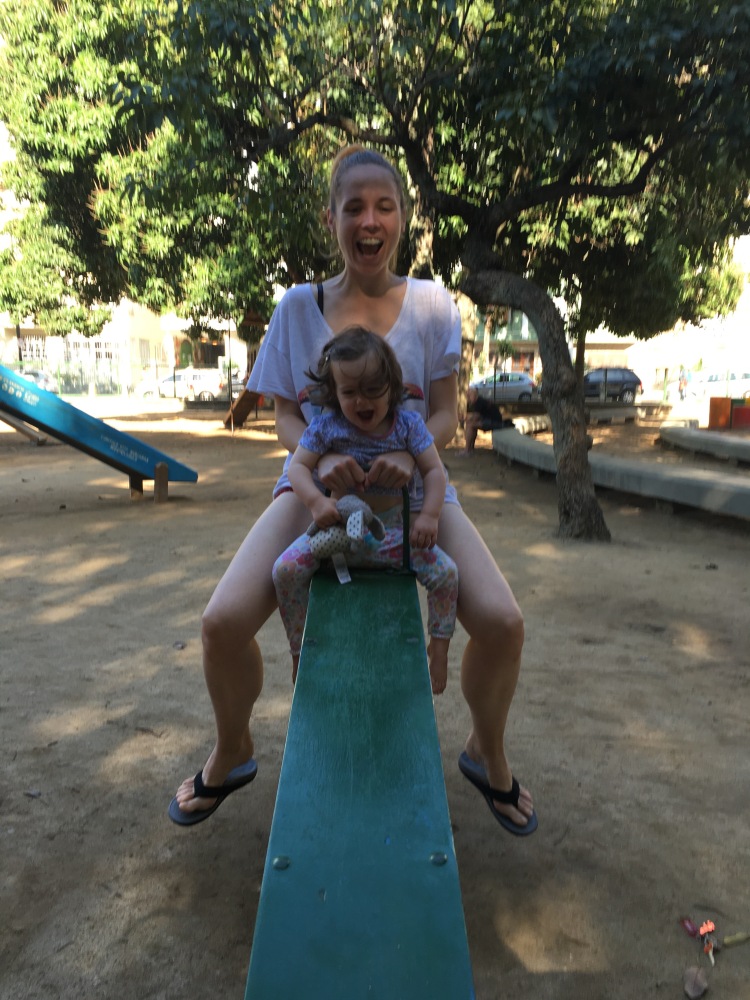 Fun for all ages in the playground

6. Botanical Garden. Vast with a fair amount to explore. As neither of us is particularly driven by botany, on its own we found it to be a pleasant, albeit unremarkable, way to spend an afternoon. But it will always hold a special place in our hearts as it was here that Amber, a latecomer to walking (she is her mother’s daughter), experienced a bit of a breakthrough. Grasping onto our hands for support, the distances she went that day were unparalleled to anything she had done before, and the look on her face was a picture. Something clicked in her brain and she just began to love it.

7. Pedra do Sal. Admittedly this would have been better experienced at night when by all accounts wild samba parties bring the place alive. That said, it was pretty cool to see it during the day and get a taste for some of Rio’s past. A historical and religious site of significance, it became a Quilombo village – a township offered to freed slaves as reparation – and it was where samba music was born. Colourful houses border the winding cobbled streets and there are a couple of cracking views to be found as you wander around.

8. Christ the Redeemer. Perhaps surprising that it is the lowest on our list given it is one of the seven wonders of the modern world. But the day that we visited it was rammed and cloudy, so even if there were views to be had we wouldn’t have seen them for all the people. The trip was worth it just to see the statue up close – he is as big and imposing as pictures indicate. But as the crowds got increasingly pushy, we hurried back to the relative calm of downtown Rio below.

Us looking like thumbs again, Christ in the background

This is evidently not a comprehensive list of Rio’s baby friendly activities, we are sure there are plenty more experiences to be had. We did a couple of things that were not so baby friendly, but very worthwhile and definitely added to our overall Rio experience (see separate posts on our Olympics athletics session and the tours of a favela), as well as a couple of things that were fine and enjoyable but not worth commenting on in depth (tourist markets and Copacabana beach included).

Overall, we left Rio feeling satisfied and fulfilled. It is the sort of place that people are drawn to, and you can see why. We hope to one day go back, perhaps around Carnival time so that we can try – and no doubt fail – to show Amber that her parents still know how to party…