We spent the month of October in Buenos Aires. Up until then we had been on the move for almost two months, and while the travelling was amazing, we were starting to feel like we might all benefit from settling in one place for a little longer than a week.

Our plan for the month was to hunker down, save some money, try to improve our respective Spanish levels (more on this in an upcoming post) and find some enjoyable child-centric things to do together. All of this, we managed to achieve (except the save the money part – did someone say budget?) with – to our immense delight – a few additional gems squeezed in as well.

Buenos Aires is pretty dreamy. Beautiful to look at, fun to be in, it is grand, individual and full of life. We spent the first few days strolling about, admiring the architecture, mincing around in parks and generally just enjoying the relative stability of knowing we didn’t have to pack up all our belongings again any time soon.

The Rosedal – one of the many beautiful parks of Palermo

Being a massive city, it has something for everyone, and as such over the course of the month we found plenty of activities that were very Amber-compliant. There was the participatory science museum, the Japanese Gardens with the fish and the ducks, and the multitudes of green spaces and playgrounds. Our particular favourite however was the Museo de los Niños. More a massive playground than an actual museum, it offered fun and interactive ways to learn about the world, and although aimed at children much older than Amber, it had a charming little play area for the little ones so jam-packed with toys, stuffed animals and an aquarium that she literally didn’t know where to turn. 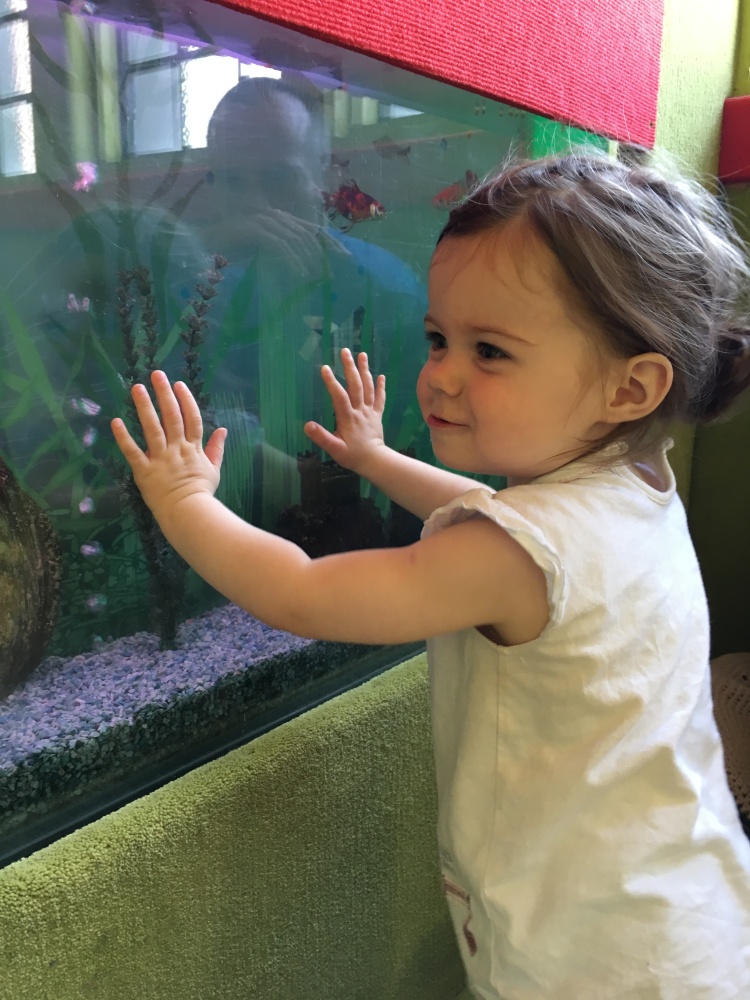 Amber playing with fish at the Museo de los Ninos

Three weeks into our time in BA, Amber’s Nana (aka my mum Christine) arrived to visit us. She is a huge part of Amber’s and our lives in the UK and had been sorely missed, and immediately upon her arrival it was as if we had never been apart. We set about showing her our favourite BA discoveries, and making some new ones. The best – and definitely most impressive – was going to watch the Buenos Aires’ Philharmonic Orchestra carry out a rehearsal for their Higher Institute of Arts concerts. Performed at the beautiful Teatro Colon, we got two delights in one – listen to exquisite classical music in a world class concert hall (with Amber serenely watching In the Night Garden by our side).

And with Nana so generously offering to do some babysitting, all of a sudden our dynamic changed. After having hardly set foot outside any time past 8pm for over two months, the prospect of going out in the evening became live and real. As such, on our final weekend in the city, we crammed the three nighttime activities Buenos Aires is most famous for into three evenings – clubbing, tango and football. And I found myself dusting off my drinking shoes and staring down the barrel of a whopping three nights out on the trot.

Thursday – Our Big Night Out

After having built it up for over two months, when we actually got round to going out just the two of us, it was exciting, if a little odd at first. It was hard leaving Amber after spending so much time glued to her side. We put her to bed, lingered awkwardly to triple check everything was ok, then waved goodbye to my mum and made haste to our nearest pub (a local Irish pub no less). We had to prepare ourselves for the night ahead. Having heard that Porteños (people from Buenos Aires) only really hit the clubs sometime after 2am, we were in for a long haul.

With one opportunity to go out for a proper evening meal in the city, we wanted to make it count. And we did. Parilla Peña is a steak house in Recoleta that has a strong reputation for the best steaks in town. The restaurant was packed and buzzing, the service was manic, and the steaks were beyond delicious.

We left the restaurant full to bursting, and after a couple of tequila shots in a nearby bar, we made our way to a club called Niceto in Palermo. Apparently THE place to be on a Thursday, Niceto hosts the weekly Club 69 event, a party tantilisingly described as “Buenos Aires’ most notorious club night, it combines an unlikely mix of transvestite strippers, b-boys and breakdancers, and banging techno. It shouldn’t work, but somehow it does.”

For reasons unknown, after queuing to get in, we were told we had to come back an hour later. Which we did, a few more drinks worse for wear. But upon queuing the second time, as we neared the front we suddenly realised we had no cash to pay our entrance fee. Could we charm the lady at the door with our sweet smiles and British helplessness? Of course we couldn’t. We were left standing hopelessly as people filed in around us, frustrated to have come so far to fall at the last hurdle.

Lurking by the door, we struck up a conversation with a young chap – we’ll call him our guardian angel. He had come outside to smoke and was heading back in. Before we knew what was happening, we found ourselves being ushered past the bouncers and into the club. We looked around to say thank you to our angel but he had disappeared. Was he even real?! It didn’t matter. We were in!

We spent a deliciously smug few minutes on a balcony looking down at the scene beneath us – colours, lasers, hands up in the air – laughing hysterically at our lucky break. The atmosphere was utterly electric. The music was pounding and the place was heaving. It was exactly the sort of place we would go to back home – if London’s club scene wasn’t in the throes of a long and painful death – and it was brilliant.

The crowd absolutely loving it in Club 69

The music was far too infectious and we threw ourselves onto the dancefloor. All around us were strippers, drag queens and cabaret performers dancing on podiums, dragging people up to dance with them. The crowd – and us in it – were absolutely loving it.

Sadly though, we were not able to stay as long as we would have liked – we are parents now and were due to have a very painful awakening at our usual hour of 6am. The time we had there though was awesome, full of fun, laughter and raucous dancing. Buenos Aires has a fierce reputation for a banging clubbing scene, and from our small but selective little sample, we can safely say that it is 100% deserved. 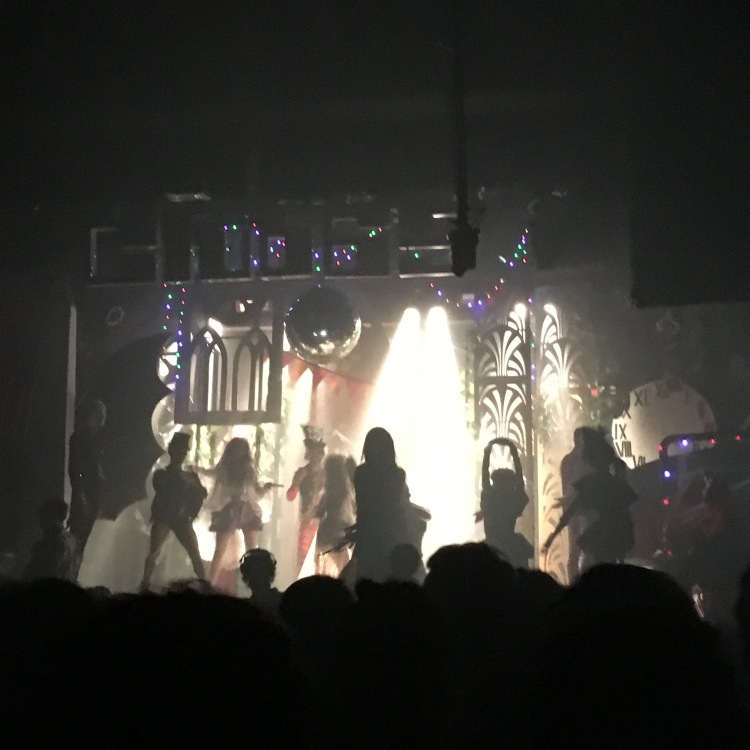 Wanting to make sure that my mum also got to experience what BA’s nightlife had to offer, with James at home doing the babysitting I headed out again the following night (proving that, when it counts, I still got it). Our plan was to watch some tango and try to understand a little about what this great art form means to people in this city. Instead of going to watch an actual show (the sort that are generally laid on for tourists and therefore potentially a bit tired and tacky) we decided to go to a milonga, an event where local people turn up to teach, learn and dance tango with each other.

To start with we went for dinner and some drinks. We went to Cumaná, another excellent local little restaurant offering regional fare such as stews and empañadas. As always with mum, the conversation flowed as comfortably as the beers and wine, and we spent a happy couple of hours gassing away, unaware of the time passing by.

Following dinner, on we headed to some bars in an area called Almagro. Full of life and oozing with character, they each deserve a mention. First was a place called Señor Duncan, artsy and bohemian, with art work for sale on the walls, tapestries draped across doorways and fairy lights dangling over the bar. The service was cheerful and chirpy and we felt immediately welcomed. Next we went to El Boliche de Roberto, an ambient but serious little place, where we felt like we had stepped back in time 150 years. Primarily lit by candlelight, the walls were lined with dusty and ancient looking wine bottles, and as the only drink they seemed to serve was red wine, the atmosphere felt convivial yet contemplative.

The musty yet ambient interior of El Boliche de Roberto

Finally we arrived at our milonga, La Cathedral Club. We hadn’t known what to expect, and were more than pleasantly surprised. The room was dark and mysterious, gigantic and cavernous, with huge ceilings and tapestries covering the walls. Tables were clustered around the outside of the hall, with the majority of the space reserved for the dancefloor. A smattering of spotlights lit up the floor, but otherwise the room was barely lit, and a sense of romance, intimacy and desire filled the air.

We managed to get a table with a fabulous view of the action. The evening had opened some hours previously and dancing was in full swing. Numerous couples were on the move at all times, ages and levels varying widely. The more experienced dancers were excellent, smooth, sexy and sultry, a real treat to watch. But we found ourselves particularly touched by the newer dancers. You could tell they were learning, eagerly feeling the music as they went along, their sheer joy of dancing shining through.

Romance and mystery in tango at La Cathedral Club

People had come to the milonga in groups, or on their own, but it appeared that everyone was primarily there to dance with strangers. Very traditionally, men moved around the room asking the ladies to dance, and the ladies sat eagerly at tables, waiting to be asked. We were amused and charmed to be asked a couple of times, but we were enjoying watching so much (and let’s be honest – the site of us attempting tango may have ruined the sultry mood) so we politely declined.

As we had hoped, going to the milonga gave us an insight into local life that a touristy tango show just wouldn’t have. It was real, unrehearsed and endearingly passionate. Porteños go to milongas for a number of reasons, socialising and a love of the actual music being an obvious two. But they also go to lose themselves. Tango as a danceform is as tense, as embracing and as provocative as it gets. The expressions, the passion, the sensual flicks. We noticed that no matter who was dancing with whom, whether the couples knew each other, whether they were well paired, they completely gave themselves to the emotions of the dance. Despite being a group of unknowns in the room, there was a genuine sense of togetherness as people found themselves on the dancefloor. And although we were but mere spectators, we still felt embraced by the dance and enriched by the evening, and we came away feeling we had scratched a little bit beneath the surface of why tango is so revered.