While we were in Santiago, I volunteered with a local homelessness charity, Corporación Nuestra Casa (Our House) for two evenings a week. A Chilean voluntary organisation, it has been providing food and shelter to the capital’s street dwellers for 16 years. The following is an account of one of the evenings I spent with the charity, handing out food on the streets of Santiago.

7.00pm Volunteers start gathering for the evening shift in the kitchen of Nuestra Casa HQ. An old colonial style building in vibrant barrio Yungay, it serves as a halfway house to some 30 men who were previously homeless, supporting them with social care and subsidised rent as they seek to establish themselves in new existences away from the streets. 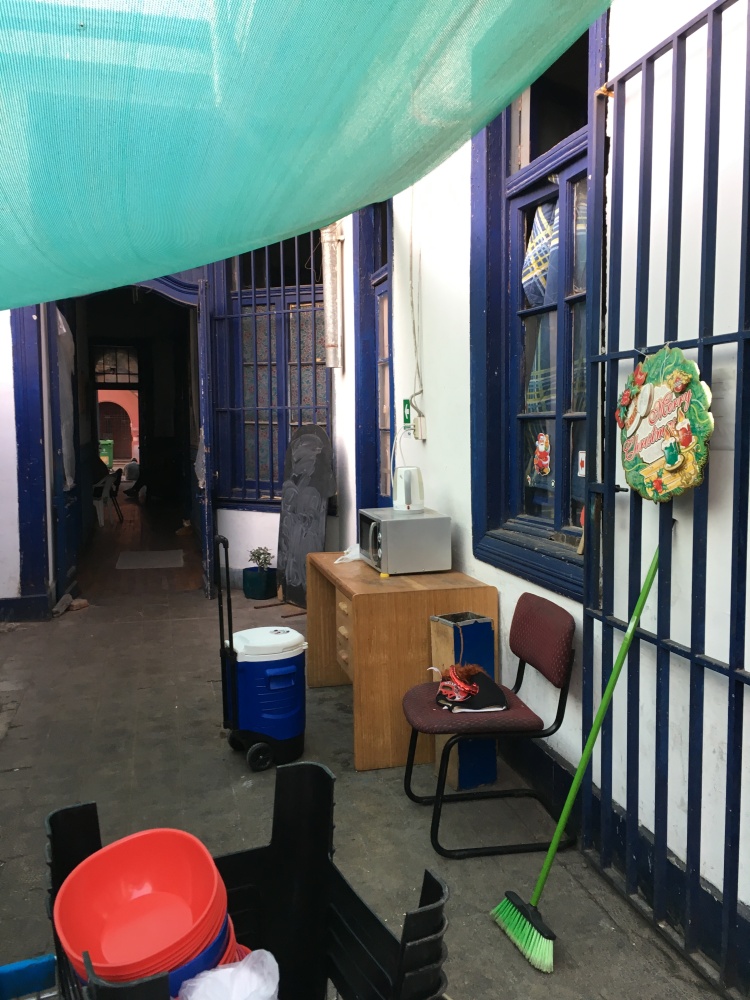 There are about 10 volunteers who make it in today. The atmosphere is lively and everyone chips in to prepare the food. We are all there to help out on the Thursday foodbank. On Thursdays the team travels outside the local area to another barrio, so sandwiches are made as they are far easier to transport than the massive vats of stew that are prepared for the local shifts.

We mix up huge containers of chocolate milk and fruit tea. I am surprised by how much sugar is put in, but my colleague explains why. For many of the clientele, this drink may be the only source of sugar in their day, providing them with a vital nutrient that will help replenish the body when the drugs wear off and the unavoidable comedown starts. 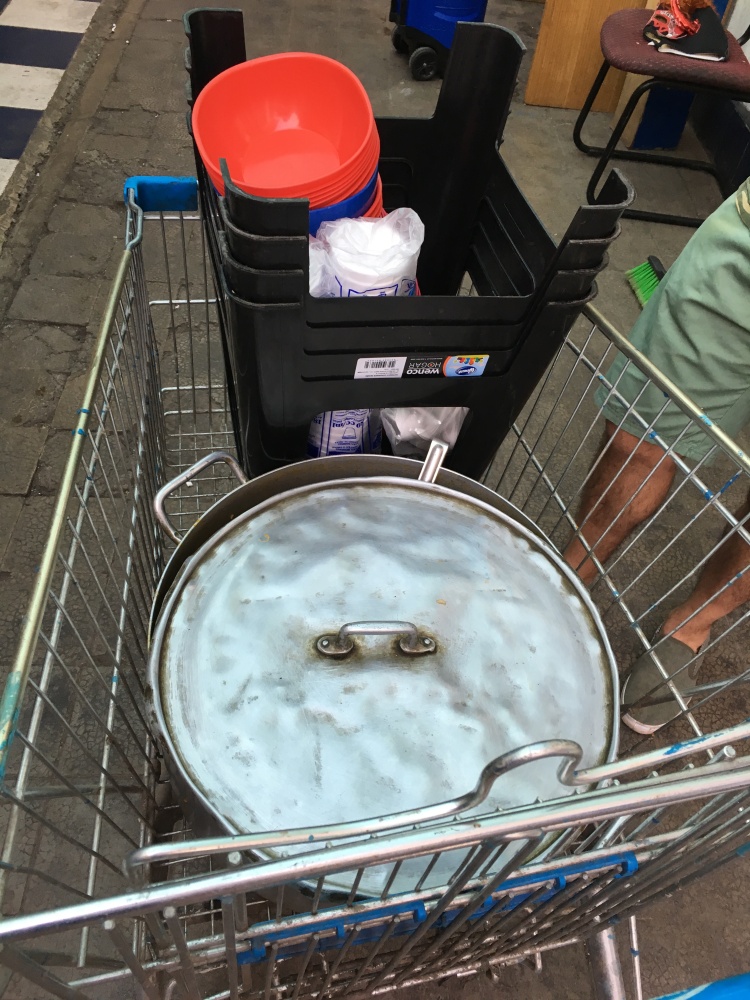 Vats of food are prepared to take out

7.45pm We all don our Nuestra Casa pinnies and jump in the charity van. We are heading to the Vega Central, the wholesalers fruit and veg market in the north of the centre. During the day, when the market is in full swing, it is a frenetic and bustling place. In the evening however, with the traders gone, its character changes and the homeless reclaim the streets.

Parking in the main parking lot, we set up shop on the steps of the market. We split into two groups: one group stays on the steps dishing out sandwiches and hot drinks to everyone that turns up, the other group takes a bag of sandwiches and a container of tea and goes to meet the homeless out where they are. This evening, I join the latter group.

The car park outside the Vega Central at dusk, with the temporary shelters of homeless people lining the pavement to the left

8.15pm Our first stop is a little park nestled between calles Artesanos and Santa Maria, where there are a number of groups of people hanging out on the grass.

We get talking to two men that are lying on flattened cardboard boxes. Their belongings are stacked in a pile next to them, protected by a blanket thrown over the top. It is hard to pin down their ages – probably somewhere in their 40s – and they have friendly faces and warm smiles.

After accepting the food, we chat for a bit and they tell us about themselves. They earn money informally; currently their main income is from a makeshift stall they set up on a pavement nearby selling clothes, bric à brac and anything else they find that is sellable. They explain they prefer the life they have now to when they lived at home. Things are freer here and fewer rules apply.

Their light-hearted and positive attitudes are in stark contrast to the stereotype of the homeless – that of hopelessness. It serves as an interesting insight that for some, it is a choice to be on the streets.

8.25pm We next wander over to two young men in their 20s, sitting on the grass drinking beer. Their story is far more common. Hailing from outside the city, they were drawn to the capital after getting caught up in a cycle of drink and drugs. Unable to find stable employment, they now live on the streets, in a state of increased drug taking.

They are open and forthcoming, and talk willingly of their lives, their drugs of choice. The two major drugs on the streets of Santiago are pasta, a crude derivative of the coca leaf that is smoked with tobacco or cannabis, and furniture solvent, the fumes of which are inhaled. Both are highly addictive and utterly debilitating.

They explain that this part of the city is not their turf, so as the evening wears on they will need to leave, returning back to the centre where they are better known. They appear at ease with their circumstances, but openly recognise that this life is both dangerous and hard. 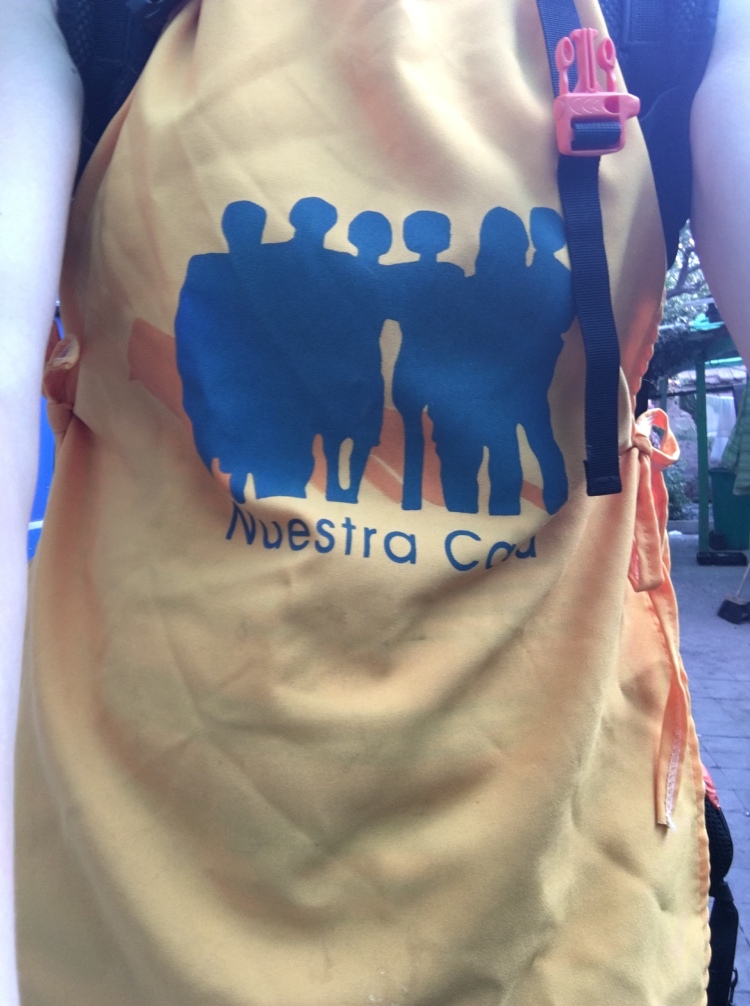 Nuestra Casa pinnies worn by all the volunteers

8.40pm We leave the park and cross the road, to a small patch of grass in the middle of a major intersection, the junction between calles Recoleta, Artesanos and Bellavista. Here, we find a cluster of tents and mattresses that make up the permanent encampment of a family that have been living on the streets for many years. Tarpaulin is hung between the trees, providing shade.

I am told that between 20-30 people live here, including two young children of two and 10 years old. Some of the family are at work cleaning the windscreens of cars stopped at the traffic lights. Some are just milling around. We see a couple of people asleep in their tents, arms and legs protruding. Most are intoxicated.

Our group stops to speak to the matriarch of the family, the mother of the two young children. She is in deep distress. The family are very concerned for the youngest boy, as he keeps having convulsions. They fear he has a tumour in his brain but have no money to seek medical care for him.

The family are confusing, chaotic, yet also reassuring. Living a hand to mouth existence, camped in the baking sunshine in the middle of a major junction, it is a brutal life. Drugs and insecurity are a permanent feature of their lives. But where there is family, there is intimacy and protection. Stability in an otherwise fraught environment.

9.10pm We make our way from the junction into the back streets of the Paseo Patronato. Camped out on the pavement on mattresses and makeshift beds, we find a group of 10 or so men lying under shop porches. We have run out of sandwiches at this point, but there is still some tea which we share out to those that show interest.

Everyone here is heavily intoxicated. As I hand out tea, I approach an older man lying on some crates whose eyes are closed. My colleague signals to me to avoid him, so I quietly move away. 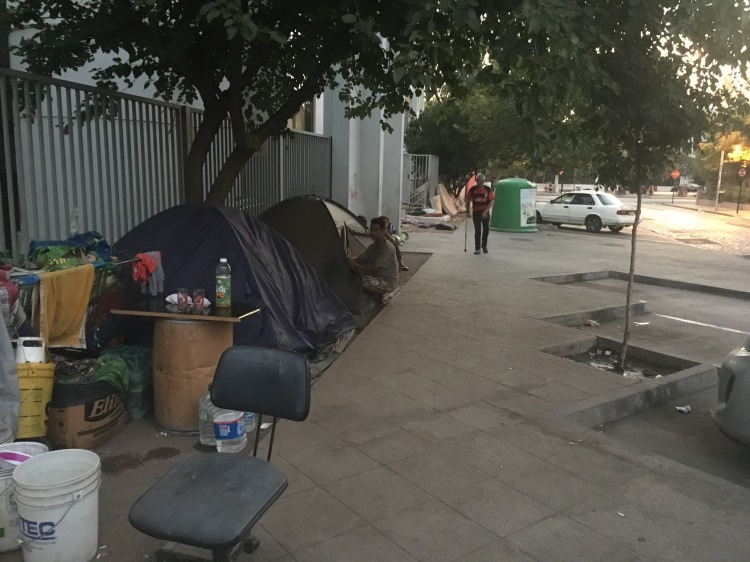 The typical set up of people living on the streets of Santiago. NB. This is not the shelter of anyone mentioned in this post

My colleague later explains that a couple of weeks prior to tonight, this man had lunged at him with a knife. The attack was fumbled, and completely unprovoked, and my colleague was not harmed. It is suspected that the man was suffering from drug-induced psychosis.

None of the group want to talk, so we don’t stay long. As we leave, we stop next to a man in his 50s who is sitting on the pavement. He says little, seemingly unable to speak. After we leave, I am told that he is schizophrenic, at times able to talk, but often completely uncommunicative.

9.25pm We start heading back to the carpark to join the other volunteers. The way back takes us past a family, sitting together on a couch at the side of the road. There are no tents or mattresses nearby so it is unclear where they sleep. A teenage girl is sat on the couch next to an infant’s car seat. I peer in, expecting to see a baby, and instead find a tiny puppy. Only a couple of days old, he is cute and lively, and a source of amusement as we hand out what is left of the tea.

In total, I spent eight evenings volunteering with Nuestra Casa. It gave me a much deeper understanding of homelessness in the capital, an issue that is alarmingly prevalent yet sadly much ignored.

Nuestra Casa provides what it can, but their resources are stretched and their reach limited. I was surprised to learn how few organisations there are working with the homeless, and just how little support the state provides. The needs of this population are great, and in my few short evenings, I was distressed to see to what extent they are overlooked and forgotten.

Which makes the work of Nuestra Casa all the more essential.

For more information about Nuestra Casa and the work they carry out, please visit their website http://www.nuestra-casa.cl/

NB. All pictures were taken with consent.

3 thoughts on “A night on the streets of Santiago”