British Columbia is a green and peaceful place. We absolutely loved it. In total we were in Canada for just over a month, and the whole stay was extremely special for us, as, most notably, it officially signalled The End of Our Trip.

Canada is huge. And while British Columbia is only one tiny piece of it, it itself is still massive. So although we could barely scratch the surface of this gigantic province, we were pretty pleased with what we did get to. And now, as I wistfully write this blog from the comfort of our home in London several months later, this is what stands out for me during those precious final weeks of the trip…

Mountains, scenery, views, mountains, scenery, views. We were treated to some exquisite scenery throughout the duration of our trip, but Canada took it to a whole new level. Vancouver Island, Whistler, the Rockies, the Badlands, Vancouver itself… We have covered it in detail in our two previous posts (British Columbia here, and our road trip through the Rockies to Calgary here) but let it be said one final time: WOW and THANK YOU.

Just another spectacular view of the Rockies (outside Canmore)

Family. Canada was the scene of several wonderful reunions – firstly with Uncle Anthony, Aunt Patty and Cousin Emma when we arrived in Vancouver, then with my sister Katie and her husband Olly who flew all the way out to see us, with my mum who we hadn’t seen since her visit to Argentina six months previously, and then with a whole contingent of my Canadian family with whom we had not met in years (if not decades). Queue much reminiscing, much banter and much merriment in general.

The first of many delicious meals together over Easter

Friends. Again, too many years had passed since my dear old school pal Trishia and I had spent any significant time together. She had never even met James. So to get three whole days together – with our little girls – at the tail end of our trip was a bonus that I will never forget.

Reflection. Looking back, what strikes me in particular about our time in Canada was how it gave us space to look back over what we had achieved during the previous eight months of travel. Upon arriving in Vancouver, our pace slowed dramatically and things became significantly easier now that we were in an English speaking country, staying with family who were looking after us so well. We were able to put behind us the dramas of losing our passport and Amber falling so ill, and we gradually let our guards down for the first time in a while.

As is so often the case when a significant period in life draws to a close, in those last few days and weeks away we found ourselves doing a mental stock check of how far we had come during our trip. We enjoyed reliving all the beautiful experiences we had had, unparalleled joys which are often so simple but that have an indescribable impact. New places, new tastes, new homes. Endless days of exploring, adventure and discovery. Cultures, people, views, sunshine. Leaving behind the realities of everyday life, then realising with surprised contentment that we missed those realities, we were excited to rediscover them. Being together as a family, laughing, watching Amber grow, appreciating the ease of the other’s company. Needing no-one else.

So many unique moments that we had dreamed of having for years, the very motivation for our trip in the first place. Then having them, and feeling completely transformed by the experience. 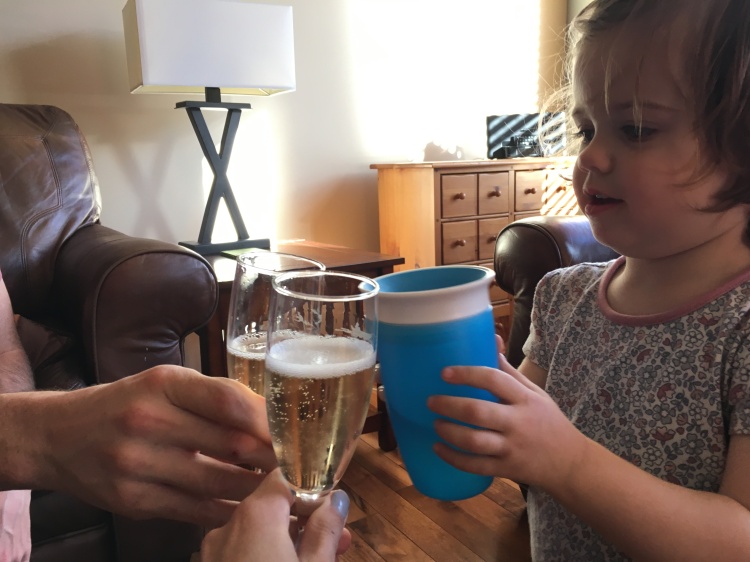 Finish as we began… A symbolic moment. Our final three-way cheers of the trip

As part of this process of reflection, we also found ourselves evaluating the other times, the more challenging ones when things became harder. Travelling with a toddler is more demanding, tiring and even more stressful than we ever imagined it would be. When all went well, the joys were monumental, the rewards immense. How satisfying it was to know that we had grabbed life by the horns and dared to take a risk. But when things went less well – and here I refer particularly to the times that Amber fell ill and we found ourselves waiting anxiously in hospital – we felt decidedly exposed, out on a limb, and overwhelmingly far from home.

It goes without saying that our first priority was Amber at all times. Gone were the days we could fully immerse ourselves in a museum, a meal out, a guided tour. We developed a heightened awareness of heat, mosquitoes, cuts, bruises. We took meticulous care to coordinate flights, buses and car journeys around nap times, bedtimes and mealtimes. Disrespect of such important routines was both unfair and completely disruptive to Amber.

Fundamental parts of travelling that were once so exciting – an unknown journey time, an unknown part of town, an unknown language – suddenly become decidedly daunting with a toddler in tow, especially when that toddler hasn’t ate and hasn’t slept and is refusing to do both. We developed an open-minded appreciation that anything from a minor illness to a major meltdown could delay, if not totally alter, painstakingly mapped out travel arrangements. We learnt that giving ourselves breaks – from travelling, from each other – was essential. We had moments of real introspection, where we questioned the wisdom of what we were doing. We understood why people had called us ‘brave’ and ‘mad’ before we set off.

However, as we reflected back during those final few days of the trip, we realised how important these difficult moments had been. They taught us so much about ourselves and about each other, about how we cope with challenges, about our strength and resilience when things become tough. We learnt that we have a great ability to bounce back, to see the best in tricky situations, to laugh when all you really want is a cathartic cry. We learnt a lot about the depth of our emotions, in particular for Amber who had changed us in ways we were still learning.

And ultimately, we learnt how important this trip had become to us. It represented more than just a career break and a bit of ‘time off’, but was an achievement in itself. Before setting out, we fundamentally believed that it would benefit all three of us. And now, with the benefit of hindsight all these months later, we know it was the case. Travelling enriched us and fulfilled us, taught us about the world, and offered us a new language. It allowed us invaluable time together. It forced us to take stock of our lives and decide what we want from our futures. Ultimately, it was the experience of a lifetime, a conquest of sorts. And all these months later, we remain immensely proud of what we achieved.