Rather than do a blog on Food in Uruguay, (similar to our previous one from Brazil) this time we’re honing in on one particular location that we think encapsulates what food is all about here – the Puerto Mercado or Port Market, situated (unsurprisingly) close to the port on the north side of Montevideo’s Ciudad Vieja (old town).

One of the recurring images I would think about before we came on this trip was the three of us in Argentina gorging ourselves on high quality, cheap steak and red wine. And it was only as I began to look a little closer at Uruguay that it became apparent we would have the chance to be doing exactly that a little earlier than expected. Uruguay loves beef. Uruguay loves meat. In a country where close to half the population of 3 million live in Montevideo there are vast swathes of sparsely populated interior plains where cows (and cowboys) are the only living things you’ll come across. Indeed it is the only country that keeps tracks of 100% of its cattle, cattle that outnumber humans by three to one. With that in mind it’s no surprise that beef (and meat more generally) is big here.

Our limited research (a quick read of Lonely Planet South America) told us that THE place to eat beef alongside the locals is in the Puerto Mercado, particularly at the weekend. So last Saturday, the day after we arrived in Montevideo, we took that advice and headed down there.

Outside the Puerto Mercado entrance with its distinctive “British” railway arches

The history of the Puerto Mercado (since you asked) dates back to 1865 when a society of entrepreneurs started an initiative to build a market in Montevideo. British engineers were consulted at the time thanks to construction methods being deployed in Europe that hadn’t yet made it over the Atlantic. With input from the British and specifically Liverpudlian work shops the final design is said to be based around a British railway station. The building was inaugurated in 1865 and began to supply ships arriving in Montevideo bay with fruits, vegetables and meats. Colonial mansions were soon built in the vicinity as wealthy families began to take advantage of the food being supplied.

Nowadays the grocery sellers have moved out and the market is filled with restaurants, with most offering goods from their open barbecues, known as parillas.

The resulting sight, smell and sound is absolutely something to behold. While travelling you sometimes get the feeling that you’ve been waiting to see a place without even knowing it. The sort of place that as soon as you arrive you know the memory of it will live on for a long time. The Puerto Mercado was exactly that. Uruguayans and tourists either sat on bar stools in front of the parillas, or at tables arranged across the market floor. The parillas themselves were huge, probably 4ft across and 2ft wide, crammed with various cuts of meat. Smells of smoke and beef and sausage mingled with the clatter of pans and the chatter of the customers. Beer and red wine flowed freely. All combined to create a wonderful, convivial atmosphere. I think we knew then this wouldn’t be our only visit during our week in Montevideo.

Meat, meat, meat and some green stuff on the parilla at La Chacra

After wandering around taking this all in for awhile we had lunch. The restaurant had an upper level which gave us a great birds eye view of the market. We were also able to see just how old and antiquated the building was with dusty beams, rickety staircases and sunlight peeping through holes in the roof. Lunch was “picana” (rump steak) with chips and “chorizo” (not the paprika spiced variety but a more regular sausage) with sweet potato. We also shared a bottle of a traditional Uruguayan wine called Medio y Medio which translates as half and half (half dry white wine, half sparkling wine). Amber decided that just after ordering was an appropriate time to go to the loo and we had come woefully unprepared with no nappies – the reason I mention this is that Claire had to run around the old town looking for nappies which meant the steak ended up being a touch overdone. Regardless it was a great lunch, Amber seemed to love the hustle and bustle (and the bread sticks) and it was a great introduction to what would become our favourite place in Montevideo. 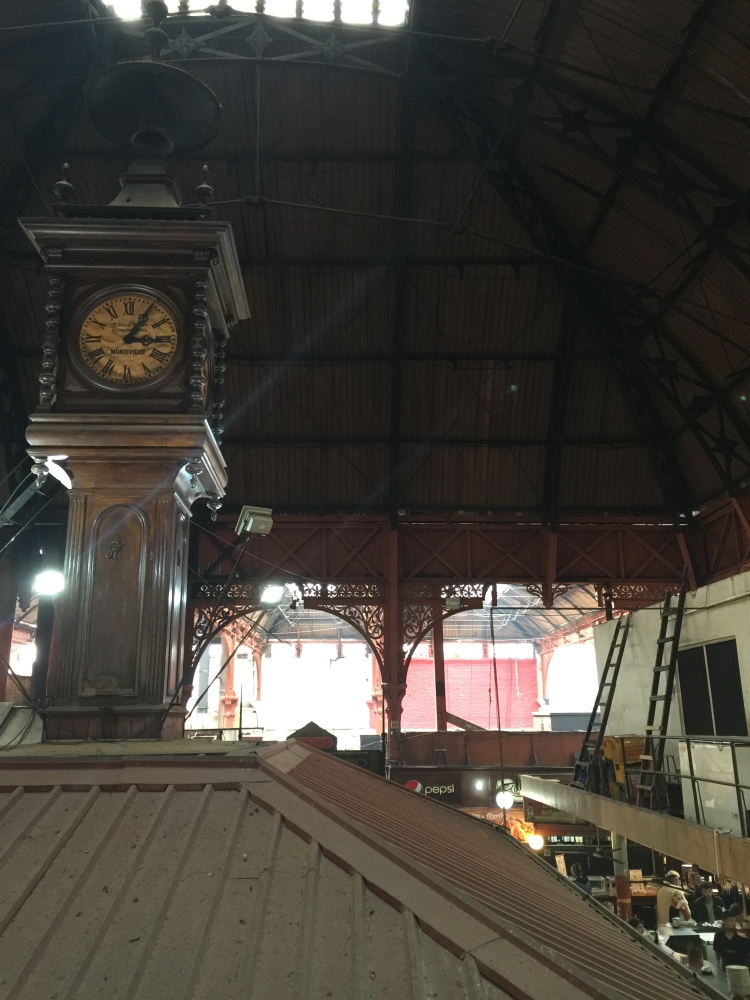 Looking out over the Puerto Mercado

We made it to Tuesday before the lure became too strong again and despite having only eaten out twice in Brazil over the course of 5 weeks we went for our second meal out in Uruguay in 4 days. The budget visibly winced but we promised we’d offset it with a few days of ham sandwiches and other austerity friendly meals.

In the spirit of saying up yours to the budget this time we chose a slightly more expensive restaurant called La Chacra. Upon arrival we got immediately stuck in to the free bread which was accompanied by two dips – a fresh salsa and a pungent green chimichurri (loads of oregano with garlic, vinegar and a nice slap of heat from red pepper). Amber got stuck back into bread sticks and focused on charming most of the nearby diners and our waiter. For starters we had another chorizo – there is something beautifully simplistic and satisfying about starting a meal with a massive sausage. For mains it was picana again – I was keen to compare with our previous one and regardless rump is my favourite cut. Many people opt for fillet but I find rump more flavoursome and if cooked properly it can still be very tender. Plus it’s cheaper. This time the steak was beautifully cooked – charred on the outside and red in the middle. Again we were given two steaks each, portion size is definitely generous which is exactly how I like it. We devoured them and along with a few beers and a bottle of Uruguayan Tannat red wine, and we finished the meal stuffed and not particularly sober (but still perfectly capable of being parents of course).

Why have one steak when you can have two?

On both occasions Amber was an absolute star – sitting on her high chair playing happily by herself, feeding herself (and Bunny) bread sticks and smiling and laughing at the people on tables next to us. It felt like she loved the buzzing atmosphere and all the different sights to look at. Despite the damage to the budget the experience for all 3 of us was one we would savour and remember for a long time.

Finally a shout out to our waiter who upon remarking that Amber was very tall for her age told Claire “she gets her height from her father and her beauty from her mother”. I was left feeling slight hard done by but it was nice for Claire (perhaps he was looking for tips but a compliment’s a compliment). So thank you to our charming waiter and to the Puerto Mercado for a wonderful Uruguayan experience. 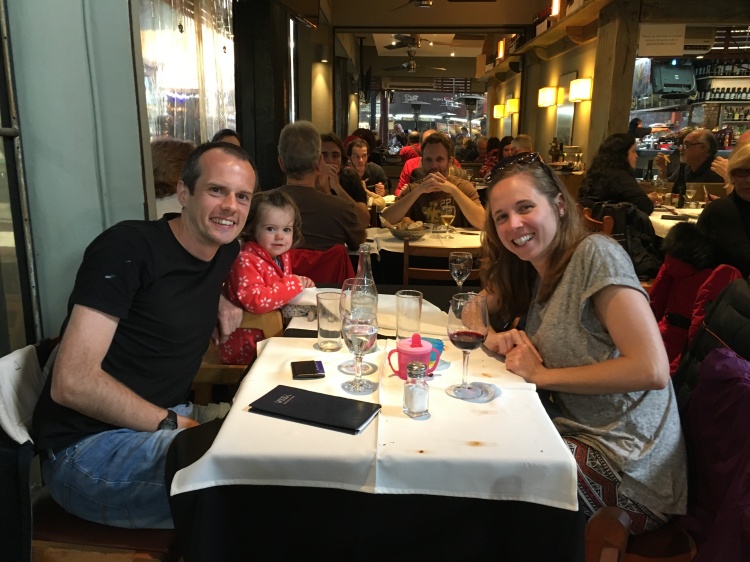 All three of us feeling significantly heavier than when we arrived