We are now 11 days into our month long stay in Buenos Aires and it’s safe to say we love it here. After changing destination every week since August 26th when we left Rio we were looking forward to the relative stability of an extended stay in a city with a global reputation. So far, despite the fact our explorations have been cut short by Amber’s first illness since being away, we are very happy to be here – the city has met all of our expectations and in many cases surpassed them.

Here’s what we’ve learnt so far.

Lesson 1: The beef is good

After banging on about beef in our Uruguay blog posts (here and here) I hoped we could broaden the scope of our blog posts now we’re in Argentina. However all it took was a homemade burger using some beef mince from a local Carrefour to get our minds well and truly back to cows. Maybe it was down to my cooking prowess but for what was essentially just a bag of supermarket mince the fullness of flavour was fantastic. Given our budgetary restrictions (particularly after a slightly indulgent time in Uruguay) we were very happy to know we could still enjoy great beef at home. On top of that after stumbling upon a Food Festival last Sunday we enjoyed an awesome steak sandwich – succulent, juicy and flavoursome. Not sure our digestive systems share our enthusiasm.

Lesson 2: The buildings are beautiful

It’s safe to say I’m no Kevin McCloud but even my architecturally naive little mind has appreciated just how stunning Buenos Aires is. There are massive European influences everywhere, as most travellers remark upon when they arrive, none more so than in Recoleta, the neighbourhood we are staying in. In a similar way to London when you turn a corner you are greeted with yet another beautiful building – from the worn colonial mansions in San Telmo and the high rise apartments in Recoleta to the French and Italian influenced grand historic buildings in the microcentro, this is a wonderfully striking city to look at.

Lesson 3: Amber understands far too much of what we say

We knew the day would come eventually but maybe it’s come a little sooner than expected. No more swearing, no more mentions of the words “In The Night Garden” (we even expect “ITNG” to have a short shelf life), no more talk of “playgrounds” unless you’re about to leave the door to go to one. At the same time however what it does mean is no more guesswork over what fruit she might want for dessert, or when she might be hungry. She’ll even mention “berr” which is her word for “bed” when she wants a nap. Our ability to communicate two ways with her and seeing her speech and comprehension come on so well has been one of the highlights of the trip so far, and particularly since being in Argentina.

On one of our first days here we decided to visit the famous Recoleta Cemetery which is cited as one of the most popular “attractions” in Buenos Aires. This is a huge sprawling town within a town where grave stones are replaced with enormous mausoleums, some as big as a two bedroom semi. A couple of things strike you as you wander, uncomfortably, through the site. Firstly that it really is quite strange to go peering into people’s places of rest, in some cases seeing the actual coffins. We saw many visitors poking their cameras right into the mausoleums to get close up shots, or posing next to them… “here’s me next to a dead Argentine president, don’t I look great!” It was really quite odd. Secondly that the location is ludicrously prime real estate, sitting right in the heart of Buenos Aires’ most upmarket suburb – how tempting it might be to stick your family’s mausoleum on AirBnB to capture the sky high rents of the area. You can almost picture the ad, “Hosts will be on the property during your stay, quiet and respectful neighbours, no parties.” 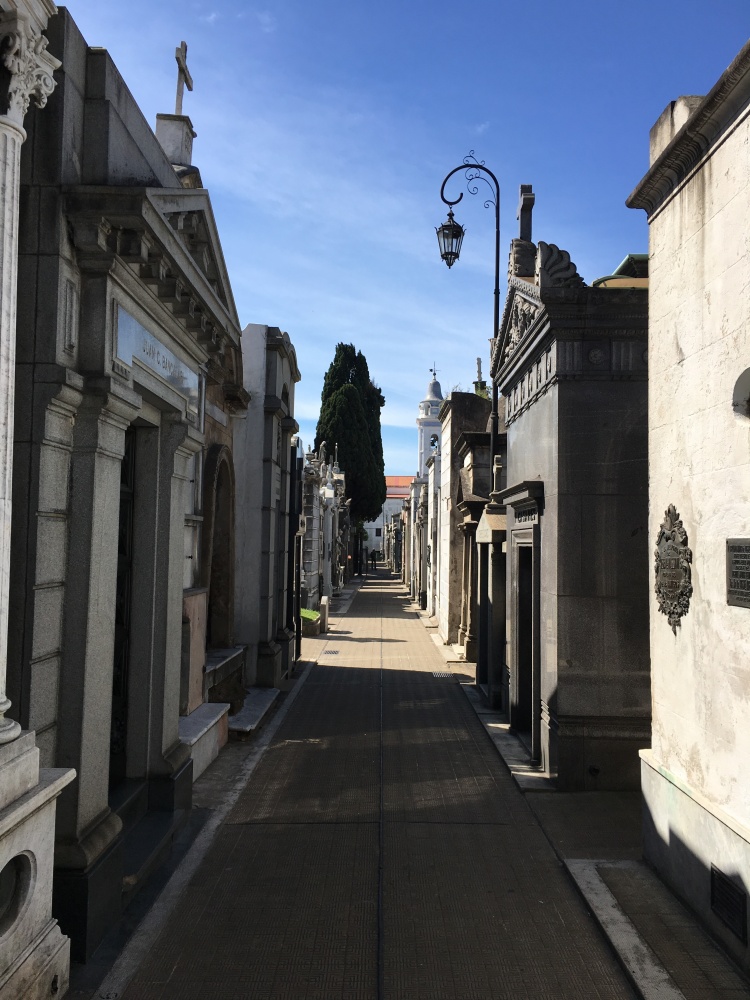 Lesson 5: Despite the proximity it’s a different ball game to Montevideo

Under 300km separate these two capital cities but they are a world away in terms of atmosphere, busyness (and business) and things to do. That is not to take anything away from Montevideo, we enjoyed it’s laidback vibe and tranquil nature and we don’t actually think it is trying to be anything else. But when we first arrived in Buenos Aires there was a vibrancy, dynamism and liveliness that we immediately warmed to. Additionally with European architecture there was a familiarity that was welcoming and helped us quickly adjust. There is also far more of an international vibe here reflected in the different districts, cuisines and residents. Maybe what I’m really trying to say is that we managed to get a cracking Indian takeaway in Buenos Aires and for that we will always be eternally grateful. Montevideo take note. 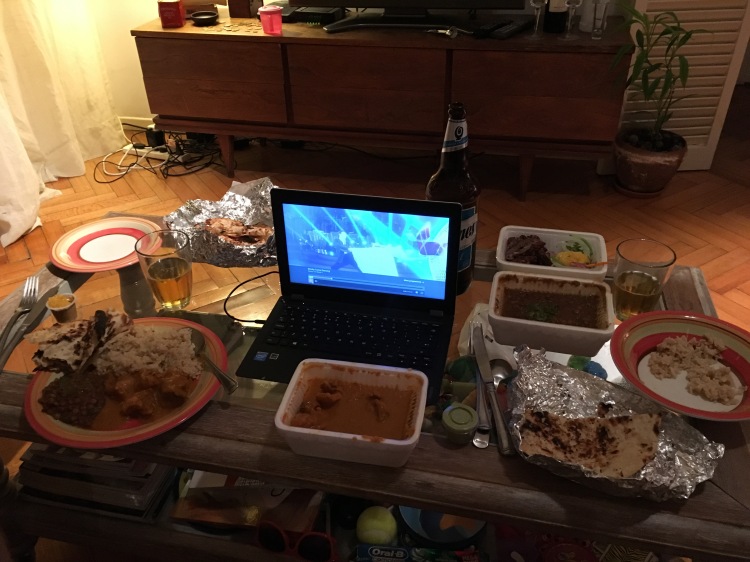 About as un-Argentine as you can get. Saturday night in with an Indian takeaway and Strictly Come Dancing. Living the dream.